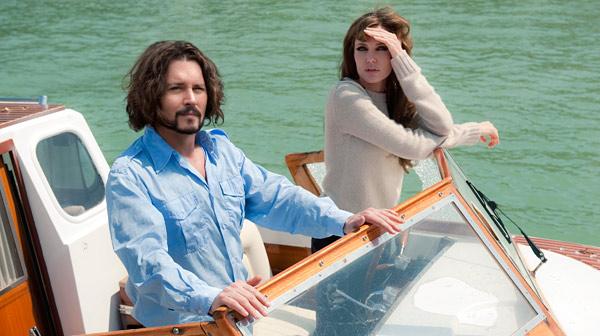 Actual Trailer for The Tourist Johnny Depp seems to playing down his charms for his next film The Tourist. The film also stars Angelina Jolie and Paul Bettany. It looks quite horrible for some weird reason. The film is directed by Florian Henckel von Donnersmarck. Johnny Depp is like in a fat suit with Jack Sparrow antics to boot something is not right.

But it feels like it will creep on us with Johnny Depp playing the role. He seems to be in a daze after the horrible take on his last film Alice in Wonderland. He really has to get out of Hollywood and have a breather. It will really suck him dry and he won’t even know it.

The film also stars Rufus Sewell and Timothy Dalton. It is certainly looking a fluff piece, which most of the fans of both of the stars will lap up. There is a lot of espionage thrown in this movie to waste our time.

Frank is an American tourist visiting Italy to mend a broken heart. Elise is an extraordinary woman who deliberately crosses his path. Against the breathtaking backdrop of Venice, Frank pursues a potential romance but soon finds himself the pursued as he and Elise are caught in a whirlwind of intrigue and danger.

The Tourist opens on December 10.