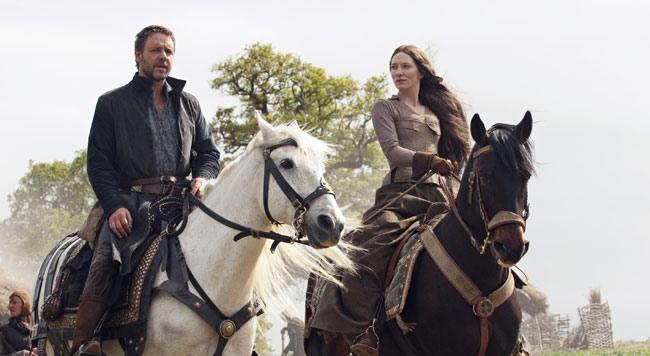 We had already debuted the first trailer of Robin Hood a week back. It really gave us a feel of what to expect with the film film. It didnâ€™t really show us the fill scope of the film. Russell Crowe really shined in the trailer which is not a surprise. He really works harder when he is with Ridley Scott.

Robin Hood will be based on the old film only with the exception of some interesting look for the film. It really looks like Gladiator in a forest. The trailer also gives us some idea of the story and stuff.

The film looks a lot grittier than the older versions of the film. There are also some interesting fights in the forest. Ridley Scott has also made some improvements by using some really cool ideas for sound in the trailer. I think the biggest attraction to the film is not really the look but the cast of the film.

Robin Hood chronicles the life of an expert archer, previously interested only in self preservation, from his service in King Richardâ€™s army against the French. Upon Richardâ€™s death, Robin travels to Nottingham, a town suffering from the corruption of a despotic sheriff and crippling taxation, where he falls for the spirited widow Lady Marion played by the beautiful Cate Blanchett, a woman skeptical of the identity and motivations of this crusader from the forest. Hoping to earn the hand of Maid Marion and salvage the village, Robin assembles a gang whose lethal mercenary skills are matched only by its appetite for life. The action sequences in the film look really polished. I think loads of people are going to run to theaters to check out what is in store in this film.

With their country weakened from decades of war, embattled from the ineffective rule of the new king and vulnerable to insurgencies from within and threats from afar, robin and his men heed a call to ever greater adventure. This unlikeliest of heroes and his allies set off to protect their country from slipping into bloody civil war and return glory to England once more.