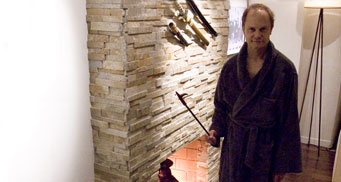 When you have a criminal out on the run and tries to get his way into the wrong party with a weird host what do you get? A good looking mash up.

John is a career criminal and he discovers that the LAPD is in hot pursuit after robbing a bank. He has tried to be careful not to link the crime back to him they know his name. They even know the silly car he is driving as well. He now tries to con Warwick. But Warwick on the other hand is having a party for a lot of people. The setup is almost perfect for mayhem,.

John plays one of Warwick‘s friends boyfriend. He even offers a glass of wine for the criminal. But early into the evening lies of whom John really is get exposed. The film turns into a full-scale invasion of the household. He soon realizes that he is not the most dangerous man in the house.

The film will be just great because of David gets to do with the interesting screenplay he was offered. He just looses it completely in the film. Nick Tomnay is the man behind the camera. If the film is marketed well it could become a sure- fire hit for sure.