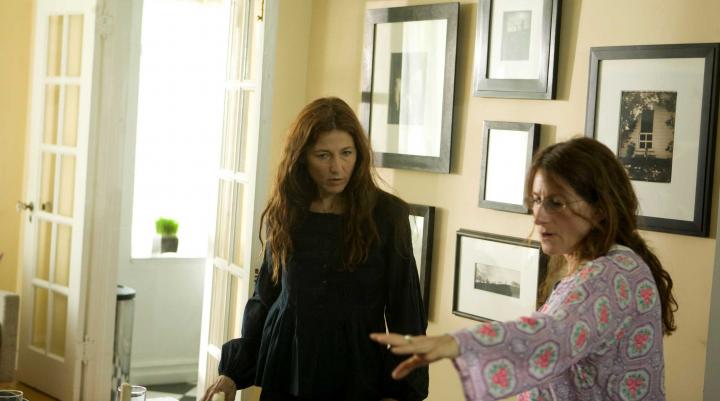 Nicole Holofcener has been working with Catherine Keener in most of her films. There is always quirkiness in most of her characters. Once again she has entered into the dramedy format. She is really comfortable over here. She had done wonders to Jennifer Aniston in her last film Friends with Money.

In Please Give she has brought together a really good cast. Rebecca Hall is part of this cast. Amanda Peet doesnâ€™t really have much to do in the trailer except blow a candle out. Please Give is a neat looking film. But there is always something missing in Nicoleâ€™s work. It is not a characteristic depth but a lack of the moment.

The little failure in her films is a lack an empathy the audience feels with the character. The characters are mostly well acted but they lack the staying power to bring in the audience to see it once again. The film was premiered at Berlin Film Festival with not much fanfare.

Nicole has a lot of good attention to detail. But she kind of digresses till she canâ€™t really return. But for some people it might be a turn off. I was pleasantly pleased to see some of the Hollywood actresses shedding their skin for Nicole. There is one unforgettable scene in the Department store in Friends with Money. Jennifer Aniston enters a really plush department store and she asks for samples of her favorite eye liner, make up kits and moisturizers. She lives on presents given to her by friends. She overstays her welcome at her boyfriends place. There is a sort of a isolation that money creates for many of the characters in her films. Nicole works on money as a metaphor. Money has its own defects because of its proximity to materialism.

Nicole works on the human psyche and delves into the various situations humans put their selves into. She aims like her counterparts trying to show us bleak scenarios and gives a thin line drawn for human condition. None of her characters actions are explicit or harrowing but more bitter sweet. Nicoleâ€™s idea of filmmaking is putting her actors in less decorated settings to let us as an audience explores their lives.

Catherine Kenner is no stranger to household movies. Where she takes on the role of the self preserving mother or woman? Catherine has worked at a brisk pace with directors who have given her a new sense of purpose and poignancy.

Nicole will still make these personal movies regardless of how well her films perform in the box office. But she still manages to get the cast she requires in the start. Filmmaking is more of the art in convincing your counterparts that you believe in the story and nothing else really matters beyond that. Let there be more films with this personal angst and let us see how people live their lives in this age of discovery.