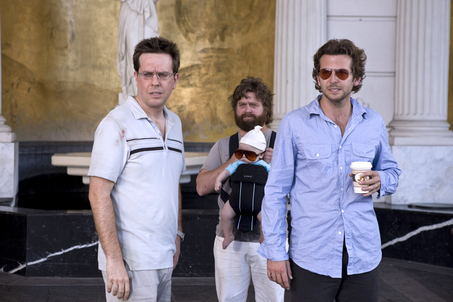 Sometimes films are all about timing.

Do you think you will get to theatre on time?

Will you take count all the most valuable moments in your life?

Did you have fun or just read a great book?

Finally have you visited L.A?

Timing is a question that has given comedy its purpose. It is the lifeblood of comedy. So if you have a script which is reeking with exceptional timing you get a great comedy. Hollywood seems to have been working in overdrive trying to concoct the right comedy. I remember the days when Judd aptow had the gift. Now there are several directors who have pledged their alliance to the genre. Todd Philips is a man who was known for his movie Old School. I still canâ€™t figure out what made people watch that shoddy piece of entertainment. But over here Todd seems to jump on his feet with superbly written script.

The film is more like a collection of homageâ€™s to great directors like Scorsese and every director who fell for the sunny side of LA. It is really a difficult place to shoot. But it comes with its quirky beauty and contributes to the gritty nature of the comedy. We are pushed into a barrage of repulsive images of an actor whose surname confuses me. I am really not sure if he is funny or is he just a joke? Will we see Zach in a serious film? In this film he seems to be the line that joins everything together.

Now the premise is really simple. Four men go to Las Vegas and wake up in a suite and having a bad hangover. But there are several catches their friend has gone missing and like the several character posters. We have some unwanted visitor even a tiger. So how do they get everything to finally piece together? I sometimes say there is always a devils hand that works its magic in great comedies. This film has them in the form of naked man, wise gambler, stripper and a baby. Really all this and you still canâ€™t get it then it is fine.

It does have some universal messages of love, family and all the razzmatazz. But it is stripped bare by the performance of Zach. You donâ€™t care much for the rest of them. But with all this going for it are we still going to stand by it. This will certainly wither off its welcome in a couple of years. This film banked on its promotions and it clicked. For me it is a single watch and that is about it.