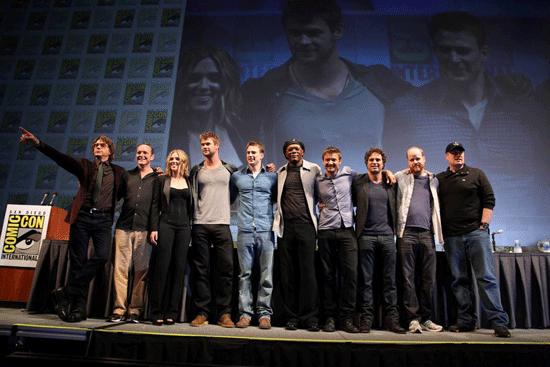 Everyone was standing when the whole cast of Avengers came out in full force and shocked everyone. It all started with director Joe Johnston and stars Chris Evans and Hugo Weaving were on hand to talk Captain America.

Joe Johnston called the film a classic adventure love story with an edge. It will be influenced by Raiders of Lost Ark, a movie he also worked on. So this will be his goal with Captain America. He also got time to study the world and history of the character closely.

The filming just began couple of weeks ago with Chris Evans. Hugo Weaving was also saying that he was listening to tapes of Werner Herzog to help get the voice of Red Skull. So after showing the footage of that there was a little more excitement waiting fans.

Then came Thor and nothing was really exciting until they showed The Destroyer. It was not really the best thing from Comic Con. Then, the stage just went empty for a little while and people were wondering was happening.

Samuel Jackson walks to the podium to introduce members of Nick Fury‘s team. It included Scarlett Johansson, Chris Hemsworth, Chris Evans and Robert Downey Jr. Then, the other two people were introduced by him Mark Ruffalo as Hulk and Jeremy Renner will be Hawkeye.

Then the director comes up and says:

Robert Downey Jr. also asked the crowd if everyone has seen Inception and said it was the most ambitious film he has seen in ages. He also said the Avengers will be even more ambitious.

Marvel really took center stage with these announcements. But will they be able to make it through all the shooting.