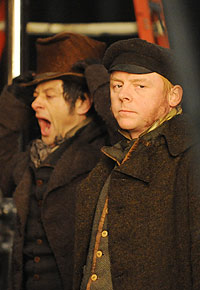 Simon Pegg and Andy Serkins in Burke and Hare John Landis is getting ready for the shooting of his next film. He has been out of work for sometime now. He is now working with Andy Serkins and Simon Pegg in Burke and Hare.

The filming started couple of weeks ago at Ealing Studios in London. But the two actors look really bored waiting for things to set up. This will be something to check out in the coming weeks. It will be nice to see a trailer cut for this film soon.