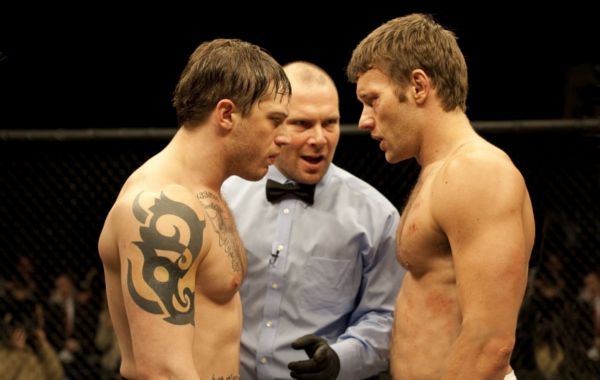 Very rarely will you come across a sport movie which has a perfect balance between drama and action and the Warrior is just one of those rare gems. Too much action with no story is meaningless and no action to back up the story is not worth the while too. But when this delicate balance does reach its mark, one of the best sports films of all time is the end result.

Warrior brings the rough and tough world of MMA (Mixed Martial Arts) sport to the big screen in a big way and I hope not for the last time. A former MMA fighter now Physics teacher Brendan Conlon (Joel Edgerton) faces financial problems with his house and is slowly getting back into the mix by competing in underground fights. But the education system finds out about his antics, thus for he is suspended without pay. So he uses this to train full time, and compete in Sparta (MMA tournament). Whereas former Marine Tommy Conlon (Tom Hardy) a war hero who decides he wants to fight in Sparta to give the prize money to the family of his fallen friend. Then there is the father Paddy (Nick Nolte) a former alcoholic who is trying to reach out for his sons for forgiveness of being a family wreck. All of it comes together seamlessly and provides for a truly gripping movie.

Tom Hardy and Joel Edgerton delivers believable and memorable performances. You will most certainly find yourself rooting for both characters (despite their faults). The MMA fight are vicious and brutal, despite not being too graphic. Nick Nolte also does a fine job whereas Jennifer Morrison does an adequate job, despite being little more than the “wife” character. See this movie for Hardy, Edgerton, and the fights, and you will not be disappointed. The end may seem a bit forced and rushed, but I dare you to not feel moved by the end of this film.

Warrior is one of those sports films with a magical mixture of emotional and physical battle. It’s a wonderful story showing how sometimes the world’s strongest forces are insignificant in comparison to the troubles of a scarred family. The movie had a unique way making you feel absorbed into the movie, getting to know the characters and feeling attached to them emotionally. Warrior is an emotional roller coaster that will make you smile, really tense, and even leaving the theater in tears. Whether you are the MMA athlete, fan, trainer, enthusiast or an average movie goer, This movie is for you. Definitely one of the best movies I’ve seen this year.