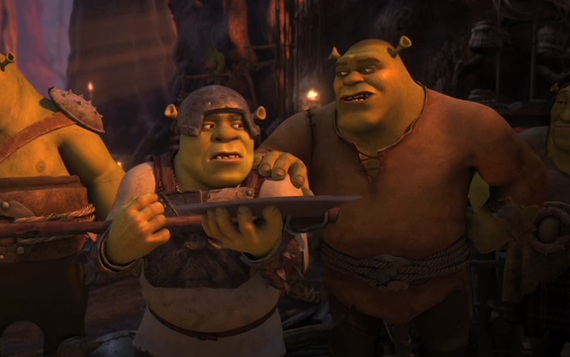 We all know Shrek â€“ some of us love him, some of us like him and some of us canâ€™t stand him. Itâ€™s hard to miss a big, ugly, green ogre with funny ears and a face that is disproportional to the rest of his body. Irrespective though, he is also very charming, sensitive and full of adventure (a requisite needed for his survival in Hollywood). When Shrek 1 was released, everyone was jumping in glee at this brilliant creation. What took the biggest bite was how wonderfully the creators made the â€˜fairytale folkâ€™ seem a realistic possibility. Seeing ginger bread since brings to mind the awfully screechy voice of a whining bakery entity.

So years have gone by and as children grew up to seeing Shrek expand his family and have mini adventures, the makers continued to believe that he wasnâ€™t meant to be pushed down in the halls of fame as legacy but to rejuvenate him every now and then (which is very normal in Hollywood these days). Shrek Forever After has come and quite honestly, it seems as though it was made to only follow trend on releasing something that was in 3D. The story seemed as though an adventurous story was squeezed out of a writer and he spat out a concoction with a prayer it worked. Sadly for him, it didnâ€™t. The humour rate decreased by 80 per cent and the emotional rating increased by 90 per cent â€“ something you donâ€™t really expect to happen in an animated comedy. The story is thus â€“ Shrek is celebrating his childrenâ€™s first birthday when it suddenly strikes him that he cannot stand the same routine day after day after day. He craves his lost reputation when the rest of the fairy world feared his mere presence and he is tired of being a showcase for a bus of tourists visiting his swamp, giving him no amount of peace and privacy he enjoyed before getting married. It canâ€™t be called the midlife crisis â€“ it is more like the marriage crisis â€“ a few years into matrimonial bliss and you being to feel stifled and claustrophobic. Suddenly life is not a sweet bun anymore rather a hell hole to get out and escape from. With such a clustered mind, he ends up with the wrong company who snatches all the wonderful things he has in life for a day of living the way he wants. And hence begins a rollercoaster adventure where he needs to win the hearts and minds of his loved ones before the end of 24 hours or vanish from existence. Every character has changed – there is terrible violence, grave dangers and confusing loopholes.

Shrek always has the image of this big, rugged monstrous hero and you wouldnâ€™t expect anybody else to grab his limelight â€“ which wasnâ€™t the case in this movie. The ogre land erupted with all sorts of monstrosities â€“ huger, uglier and not more appealing. Fionaâ€™s image seemed to hit dirt with her strange army outfit and aside from her hair, the entire look just gave away. Donkey was not as funny as he is meant to be and Puss in Boots took higher brownie points in that department with all his added cellulite.

The witches were just that â€“ scary! They looked evil and extremely vicious. Shrek has had villains in the past but none as morbid and spooky as this one. Rumpelstiltskin was not close to being scary as his witches were and I thought the pied piper was a good guy â€“ they made him so bad that if I had to teach a bunch of kindergarten toddlers his story, possibilities are much higher that I would make him look like being the bad guy chasing the good, hardworking rat folk out of their homes.

Shrek is still a nice guy and although he got certain insecurities and fears thanks to the mundane routine life sometimes gifts us, he still bounced back and realised what he is meant to do â€“ why the world over adores him. If the makers are planning forever after THAT, I seriously hope the creators are reading old comics or watching classic comedies to get an idea of how to portray true humour than make it unappealing and slap-stick.

Did you know, the entire cinema hall must have laughed thrice throughout the entire movie? Which is not a good signâ€¦ not at all.