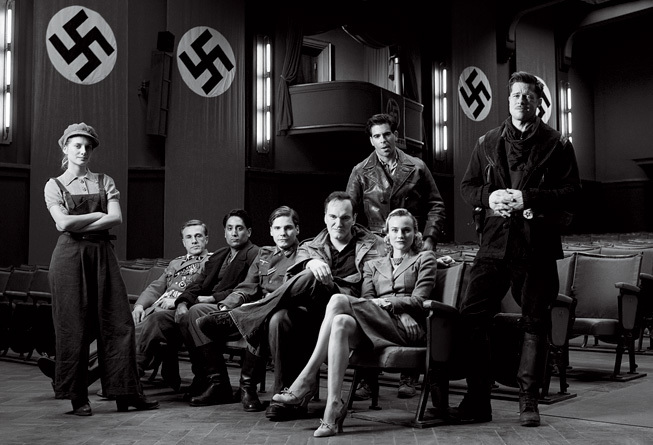 Quentin Tarantino is back with his latest creation which might be his most brilliant work to date. Pretty sure most of you haven’t noticed that Inglourious has been spelt incorrectly which goes to show how Tarantino likes to mess around with everyone and if your a person who really love movies, you can see in this movie how much Tarantino loves to make them. He just brings all his experience and creativity into this film.

Now, where do I start..hmm…his film-making style. For those who know a lot about Tarantino and his films wouldn’t have been surprised and actually loved the way the movie starts with the Western style opening credits, but for those who have no idea who Tarantino is, the starting of the movie and the opening Chapter would have bowled you over. He split the movie into Chapters and each Chapter had a theme and it really helped to push the story forward, getting everyone’s background story slowly. Something I kind of knew what to expect was the heavy dialogues, which some non-Tarantino fans would have found it a hard time to sit through.

Chapter 1 just set the tone for the whole movie with Christoph Waltz delivering what most people say an Oscar worthy performance. The screenplay is just amazing with the face to face, eye to eye conversations which seem like it will never end but when it does, its filled with violence and gore which is like a perfect finale to the scene. Most dialogue driven scenes in this movie last atleast for 20-30 minutes before moving on, but its never boring and always riveting which keeps the audience enthralled in the entire conversation till it ends.

Brad Pitt plays Lt. Aldo Rein, a gun-toting Jewish-American who’s the pack leader of a renegade group of Nazi-killers, all Jewish soldiers who too are seeking vengeance over the anti-Semite Nazis. Well the film is a lot more than that. Consider the film an odyssey, more like a “Once Upon a Time” fable conjured up by a madman of fiction and storytelling. Tarantino, along with his defiant stance against tradition in film-making, graciously and constantly flips the bird at historical accuracy and political correctness.

The cast and crew of Basterds certainly deserves commendations too, especially Brad Pitt and Christoph Waltz. There is a humongous cast of stars here in Basterds, a majority being European luminaries who shine and reach a new audience. Most notably, it is one Christoph Waltz who outshines all the others and gives one of the best performances of the year. He plays the quintessential villain in Inglourious Basterds, one of the most charismatic characters ever to light up the screen.

Inglourious Basterds is an incredible achievement for Quentin Tarantino and its right there with the best movies of the year.