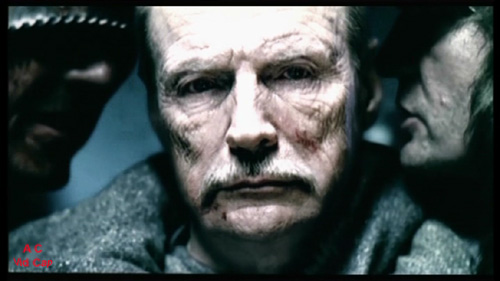 Timur Bekmambetov‘s “Night Watch” is the classic tale of good versus evil, or light versus dark, set in modern Moscow. “Night Watch,” also a novel by Sergey Lukyanenko published in 1998, is the first of the tetralogy. It hit the big screen in 2004.

This epic tale pins beings called Light Others, who are ruled by Geser, against Dark Others, who are ruled by Zabulon. Dark Others came into existence when a virgin became cursed and opened a vortex of damnation. From this vortex came the first Dark beings, in turn causing Light beings to form to counter balance. Others are humans with extraordinary abilities who can pass into a parallel universe known as The Gloom or Twilight. Some Others are vampires, witches, or shape-shifters. When a human discovers he or she is an Other, he or she must choose on which side to fight: Light or Dark.

Light and Dark Others live within the truce set in Medieval times to keep balance between the two until The Great One comes and decides which side will dominate. The truce brought about an arrangement known as Night Watch and Day Watch. The two Watches are the Others’ way of keeping the balance; The Light watches the Dark during the Night Watch, and the Dark watches the Light during the Day Watch. Legend also has it that the Great One will choose the Dark and the Final Battle will precede the return of a present day cursed virgin. (This sounds much more complicated in writing.) When it unfolds before your eyes, it makes sense.

Anton Gorodetsky, the film’s protagonist, at first, appears to be an ordinary man. This film draws you in as you watch Anton go from a lonely, love sick man who is willing to sacrifice an innocent to have his wife back, to a protector of the innocent. Anton turns out to be an extraordinary man; he is a Light Other. (Spoiler Alert!) The film comes full circle when it turns out that the life Anton was willing to sacrifice at the beginning of the film is his own son, who turns out to be The Great One. While trying to protect his son from choosing Dark, Anton must also figure out who cursed the present-day virgin, Svetlana, or else the Final Battle will ensue.

The film ends with Anton fighting the Dark to protect his son, Yegor, only to have the Dark manipulate Yegor, The Great One, to turn against his father, thus turning against the Light and choosing Dark. This makes an excellent transition into “Day Watch”. “Day Watch,” the sequel to “Night Watch,” is not an adaptation of the second novel by Lukyanenko, but of the second and third part of the “Night Watch” novel: Among his Own Kind, and All for My Own Kind. “Day Watch” is set a year after “Night Watch.” In this film Yegor has embraced the lifestyle of a Dark Other. In order to protect his son,Anton destroys any evidence of Yegor’s attacks on humans, breaking the centuries-old treaty, and therefore leaving the Light unable to prosecute Yegor.

Dark Others are chomping at the bit, so to speak, to break the truce and dominate in the Eternal War. They are just waiting for Yegor to complete the transition to The Great One. The joyous occasion will commence on Yegor’s birthday. The once-cursed virgin, Svetlana, returns curse-free, as Anton’s love interest and a new Light Other-in-training. Oh the drama! Anton must deal with Yegor being a Dark Other; Yegor must deal with his anger at Anton for trying to kill him (twice) and not being a part of his life for 12 years. Furthermore, Yegor sees his father’s relationship with Svetlana as the reason his parents are not back together; Svetlana has to deal with Anton repeatedly helping to cover Yegor’s tracks, keeping her from doing her job as a Light Other. Svetlana slaps Yegor (on his birthday!) for being a typical teen, causing a drop of his blood to fall, which Zavulon deems is the green light for the Final Battle to begin. It’s Yegor’s birthday and now he has come into his powers. In a fit of rage he uses his powers to destroy Moscow. As Moscow is falling, Svetlana is blinded and most of the Dark Others at Yegor’s party are killed. Included among the dead is Kostya, the lover of the sexy Dark Other, Alisia. Thrown in the mix of all this family drama is the “Chalk of Fate”. Just as the name implies, this chalk allows one to change his or her own fate, but only if that fate was caused by the wielder of the chalk, and it must be changed in the same location. (Spoiler Alert!) Alisia ends up with the chalk. She attempts to use it to bring back her love. She did not cause Kostya’s death and therefore can not undo it. Anton persuades Alisia to hand over the chalk. He knows in order to save Moscow, Yegor, and Svetlana he must go back and change his decision to allow Darya Leonidove, the Dark Witch from “Night Watch,” to kill Yegor in utero. This will undo all the events that have occurred since that fateful night 14 years prior. He struggles through the ruins and finds the old apartment where the incident occurred. He writes “NO” on the wall. The scene flashes back the opening scene of “Night Watch”. It is 1992 and all have been saved.

My only complaint about “Day Watch” was its marketing (or lack thereof); I anxiously awaited this sequel only to learn of its release a week after it left the theaters. I had to wait for its DVD release.

The storyline of these films is a refreshing take on a timeless tale. The special effects are not too over-the-top-Hollywood, and I must commend the editing as well.

Now: “Twilight Watch” and “Final Watch,” will they or won’t they get green lit? The last known info was that Fox bought the rights and that “Twilight Watch” would be filmed in English (the two existing films are in Russian) and in a Studio on American soil. Boooo!! Fox should only handle the marketing, bringing it to a larger audience in the United States. Dear Fox: DO NOT CHANGE THE FORMAT; leave it in it’s native tongue and film it in it’s native land, RUSSIA, like the other two! I would not be surprised if they (the film powers that be) combined an adaptation of the novels “Day Watch,” “Twilight Watch,” & “Final Watch” and then went with the latter as the title, so it won’t be confused with that other Twilight vampire movie.