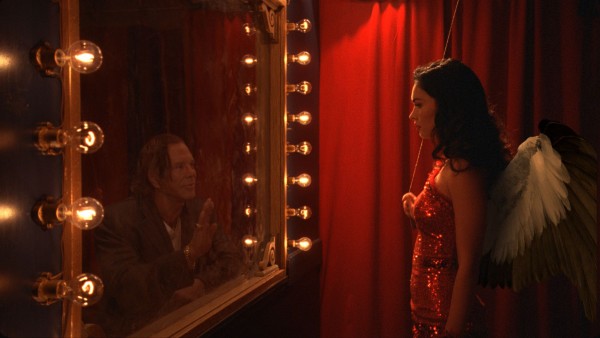 Here is the new footage from the new film starring Megan Fox called Passion Play. The film tells the story of a jazz trumpeter who falls in love with a carnival performer who is known for her wings. The film has an interesting cast that includes Bill Murray, Kelly Lynch and Rhys Ifans.

Passion Play will be the debut film by Mitch Glazer. He is known for his work on Great Expectations, Scrooged and The Recruit. Here is a small synopsis via TIFF.

This strange and lyrical love story blends old-fashioned romanticism with all the fantasy of a fairy tale. It is also a welcome sight to see Mickey Rourke in a role that bores beneath his shambling gruffness to find a tender core. The slow-burning passion that gradually simmers between him and a darkly vulnerableMegan Fox showcases the talents of both actors with finesse. Finally there is Bill Murray, the counterpoint whose role is to act as a cold shower whenever heat blows between the two star-crossed lovers.

Nate (Rourke), a small-time jazz musician, is clearly a hard-luck case. Caught trying to break into a car, he is taken off into the desert where his assailant puts a gun to his head. Game over? Not quite. Stumbling into a circus pitched amidst the vast expanses of the southwest desert, Nate finds himself drawn to the exotic beauty of Lily (Fox), the Bird Woman. Lily is cold and dismissive; socializing with customers is not her scene. But it dawns on her that this gentle giant may well be her way out of a life of eccentric exposition. Nate is protective and understanding, and to him her aquiline beauty is a magic part of her uniqueness. As their bond deepens, Nate finds that his dreams of bliss are about to be thwarted by Happy Shannon (Murray), a cucumber-cool businessman with deep pockets and an eye for the bizarre.

Drawing on the remarkable talents of its high-powered cast, this wonderfully offbeat film is filled with surprises and proves that magic can be found in many places. Mitch Glazer balances the tough-guy moments and the rocky romance with the touch and feel of a high-wire artist. It makes for a spirited and uplifting spectacle with all the spirited colour of the circus.