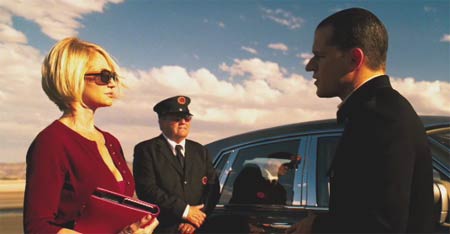 Matt Damon will shoot Liberace in 2012 Steven Soderbergh is working hard on his latest project called Contagion. He is almost ready with his next film called Haywire. It will bring in a new feel to the Bourne style action franchises.

Damon reveals that the long gestating Liberace with Michael Douglas is now aiming to shoot in 2012 instead of summer as previously scheduled. Contagion is still being worked on this whole year. The film will have a release date around October this year. Damon also signed up for Neill Blomkamp’s next movie called Elysium. Steven Soderbergh is now able to shoot and cuts at a phenomenal pace. He will be working on his last film in couple more years and will be taking an early retirement.

“He has the most varied body of work of anybody I can think of. He’s at this point where we could shoot during the day, and him being the cinematographer and the director, we’d go home, have an hour or two off, and then meet him back at the hotel bar in Chicago. They’d have a back room where he’d sit, have some pretzels and a drink and he’d take a look at the day’s work. Scott Burns, the writer, Greg Jacobs, his first-AD, and me, we’d show up, get a drink and hang out with him. Steven would have his headphones on, sitting at his laptop. And in about 20 minutes he’d cut together the day’s work. ‘OK,’ he’d say, pull his headphones off and turn the computer around and show us, right there, what we’d shot that day and how it would look on the big screen when the movie comes out. THAT FAST. He’s a FREAK,” Damon says about his work with the director on “Contagion.”

“When we did ‘Ocean’s Twelve,’ we did a wrap party at a bowling alley. I went up to him and said, ‘Hey Steven, thanks. Great time working with you. Thanks. How do you think the movie’s going to be?’ And he say, ‘You wanna SEE it?’ He’d finished cutting it and had it on a laptop. Right there, he shows me the movie!’ (LAUGHS)” Pretty amazing stuff.

Soderbergh has two movies in the pipeline Haywire and Contagion arriving in theaters this year. He will be out there to show people what he is all about before he retires.