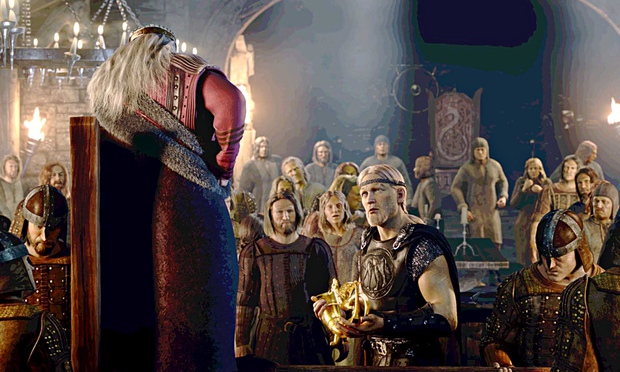 In 2007, Paramount Pictures and director Robert Zemeckis released a film based on the oldest known poem written in the English language: Beowulf. It was an ambitious project that appeared to confuse much of its audience, not because of a particularly intricate structure or story, but because a lot of people had trouble coming to grips with the connection between the literature and the live action.

But this isn’t a problem unique to Beowulf. Most every time a major literary work is adapted to the screen there are going to be those who take issue with inconsistencies, whether they be in plot, dialogue, or even general tone. But in the case of Beowulf, the passage of time and the escape from the influence of early criticisms can actually work wonders to dispel these sorts of issues. It seemed at the time of the release that some audience members didn’t like seeing an action-packed epic heavily influenced by CGI depicting the oldest work in English literature.

The problem with that is that the Beowulf is an action-packed epic. If you haven’t read it yourself, the description at Goodreads; characterizes it as a “classic Northern epic,” as well as a poem “about encountering the monstrous, defeating it, and then having to live on.”Indeed, the book reads like some sort of man vs. monster anthology, and may be the single biggest piece of proof that just because classic literature is old doesn’t mean it’s devoid of action the likes of which we might see in a Gerard Butler film. Beowulf is no dull ancient king spouting out verses about his family and legacy; he’s a full-fledged action hero going to war against mythology’s greatest monsters.

Beowulf’s nature as a pure action hero has even been recognized through a couple of video games that have come out since the 2007 film, which should lend further credence to what exactly the norse hero is all about. Ubisoft published Beowulf: The Game as a direct accompaniment to the Zemeckis film. While it received mediocre reviews, the game’s trailer more closely resembles something like a battle scene out of The Lord Of The Rings than a typical piece of ancient literature. Another game is available at Gala Bingo’s site, where various VIP offerings and themed games are in place to attract and interest players. Even there, where the game is more about visual themes than actual action, there’s a secret Grendel attack described as the “mother of all battles.” This is all to say that Beowulf was always going to be an over-the-top adventure. If you’ve read the literature, you may realize that the intensive CGI was actually absolutely necessary to capture some of the absurd antics of the hero and the drama of his surroundings. The character of Beowulf is larger than life, and it seems as if this was something the film was criticized by some for depicting.

As for the structure of the film, it concerns Beowulf’s numerous adventures and conquest on behalf of ancient Denmark. Ray Winstone starred in the title role while Anthony Hopkins portrayed King Hrothgar, the Danish ruler who initially sends for Beowulf’s help to vanquish the monster Grendel. As the film progresses, we see one conflict after another as Beowulf attacks Grendel only to incur the wrath of Grendel’s mother. In the process, Beowulf earns the favor (in a complicated manner) of Hrothgar, and becomes heir to his throne. And naturally with the responsibility of ruling upon him, Beowulf is forced to undergo even more dangerous efforts to defend the kingdom.

It’s far from a perfect film, and it does occasionally sacrifice some clarity or faith to the text in favor of effects and visual wonders. And really, awe-inspiring action is what Beowulf has always been about.