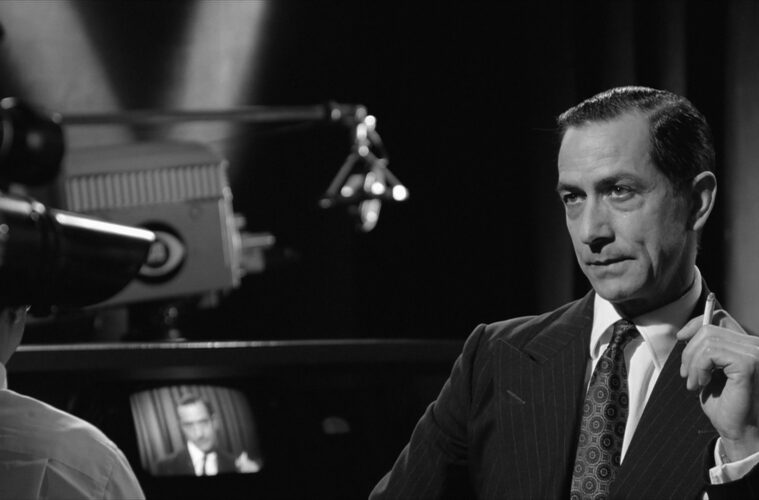 There is something about the smoke filled screens, ironed out hair, and the way people just looks in black and white movies. They almost make them look iconic which is a credit to the medium itself. Ed Murrow was one such man who would go to any extent to say the news as it is. His resolve in getting what he wants and how he wants it brings him under the scanner of Senator McCarthy. Senator was a an man who wanted try all the people who had some of Communist connections. This sometimes led him to destroy the lives of innocent people.

Ed Murrow begins a typical sitting in a room with his colleagues discussing what news can be added for his show and other shows. Ed Murrow is taken by the news of young man who was rejected by the army because his father read some Serbian newspaper. The charges brought on to this man was just hearsay. From here Ed Murrow begins a relentless circus of convincing his seniors to bring this news to the pubic. He goes with knowing fully well he will face the brunt of Senator McCarthy.

Ed Murrow is a man who is ruthlessly rational and finds it a little uncomfortable with the repercussions he faces after he gives the news. But its the way in which he handles these situations and the dry wit in his dialogs which make him more agreeable even to this day. But the challenges to come to him from the Senator create the whole core of this story. The director uses two devices in this to bring in an extra viewpoint to the characters. One is the archival footage of Senator McCarthy the other the several monitors which show Ed Murrow in several different profiles almost giving a Doppelganger effect. The film is shot extensively in the broadcast rooms where everyone is smoking and working hard to bring the news out. The choreography of all the events which happen makes it feel like Robert Altman film. There is a general balance in what is going around these rooms. They all execute their steps with pinpoint perfection. The whole is buzzing with chaos when news is about to be written but the director sets in motion the balance which only he coordinates.

Ed Murrow is played by David Strathairn who plays it with such stern face authority. The expressions only peels out of his skin when the need arises. He is an artist with a control which is unparalleled. Some of the people we have to mention is Frank Langella who complements David from word to word. This film doesn’t have a moment of realization in the characters life cycle. But it creates an awareness in the audiences eyes of what are the things to come and what we have lost. George Clooney who with his humble role in the film makes it very clear that he loves his characters but not to the extent of glorified. But rather let their actions speak for themselves and we be the better judge. This gives me added incentive to wait for his next directorial venture with a clenched fist.