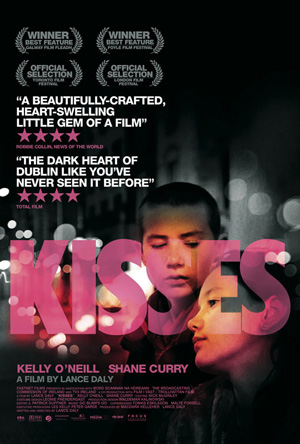 Kisses is an Irish film which has traveled art house and indie circuits under-the-radar this summer. It is a bold movie, and delivers a positive message in an atmosphere of pain and abuse, not unlike last year’s Precious: Based on the Novel Push by Sapphire. At times, it is a tender coming-of-age film of two pre-adolescents. At other times, the plot twists into a dark and frightening tale, guaranteed to pin the audience to the edge of their seats.

The story follows Dylan (Shane Curry) and Kylie (Kelly O’Neill), two eleven-year-old neighbors doomed to helpless existences in abusive households. They are harassed by their peers, neglected by their parents, and crowded out by their siblings. They live in tawdry apartments, complete with a large patch of soggy earth and a lifeless sky, thoroughly choked by electrical wires and telephone poles. But they have each other, and they embrace their relationship in a deep puppy love that their parents either reject or fail to notice. When Dylan finds himself the target of his father’s wrath, they flee their broken homes with only a wad of stolen cash. In a sequence that recalls memories of Huckleberry Finn, they hitch a ride on a flatboat and make their way to the city of Dublin.

The city offers a break from their troubles and a brief glimpse of hope. Festive lights guide their way, and they are welcomed by a joyous city dancing on the verge of the Christmas season. They use the money to buy food, a haircut for Dylan, a fuzzy pink jacket for Kylie, trendy shoes with wheels in the soles. The novelties of the shops and markets are brief and frivolous, but they offer luxuries in which any preteen may relish.

Out of money and daylight, Dylan and Kylie find the bright lights of the city have turned on them, consuming them in a malevolent world of urban decay. The nightlife pulses with sin. Streetwalkers and thugs slither through frigid alleyways. Some strangers are charitable, sympathizing or offering food.  Others are much less auspicious.

With the dangers of the streets and bitter cold of winter smothering the children, they seek refuge with Dylan’s older brother, also a runaway, who has been missing for the previous two years. Unfortunately, finding one person proves difficult in a city as large as Dublin. The two do not even know where to begin searching for the brother—a brother who may or may not be homeless; may or may not be in the city; may or may not be dead.

Kisses subtly nods to F.W. Murnau’s 1927 classic Sunrise, in which a troubled couple from the country visits a booming city. Awed by the spectacle of the city, the couple grows closer, learning and bonding together. While the overall impact of urban spaces is far more tragic in Kisses, similar themes of loyalty and relationships are present in both films.

Director Lance Daly does not hesitate to grab the reigns in this film, and there are some truly fantastic light and color effects throughout, adding to the carnival-like nature of Dublin in the midst of Christmas. The movie begins in true black and white and sporadically gains and loses color in almost unnoticeable steps, fluctuating with the passion in the heartbeats of its protagonists.

The two children frantically scour the inner-city streets of Dublin, mining it for some last trace of hope. They dig further and further into the mantle of their friendship, uncovering the humanity within. It is only through the experience of the night that they find the richest vein is buried the deepest.