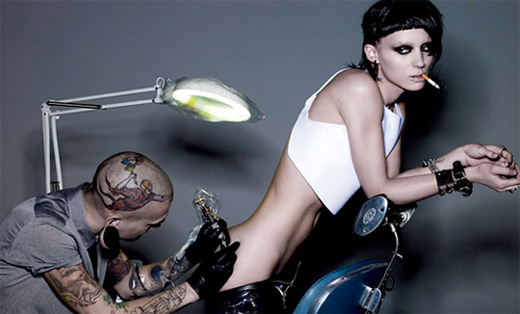 This is probably the biggest transformation of this new decade. We finally have our very new Lisbeth and she is looking as tough as the one from the books. Rooney Mara took the lead after weeks of casting for the adaptation of the popular book The Girl with the Dragon Tattoo. This will be the first installment of the popular Millennium Trilogy.

The two photos of the lady should dispel all the doubts of whether she can take on this powerful role. She looks lethal as well as throwing out some sexuality as well. There were doubts all over the place, but it is all going to change with this.

The character in the book is described as a gaming, Audrey Hepburn look-alike but with tattoos and piercings, the take no prisoners attitude of Lara Croft and the cool, unsentimental intellect of Mr Spock. It looks like they have nailed the look for the film. David Fincher worked for weeks with the actor to get the look right. This is going to be one of the most anticipated films of this year after this first look.