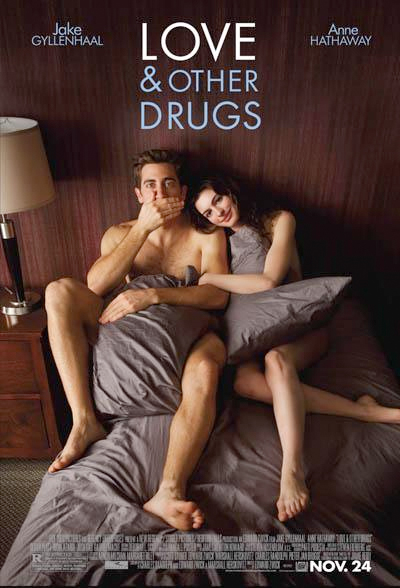 Anne Hathaway a little naughty in Love and Other drugs The first poster is out for the potential hit of this year Love and Other Drugs. The film stars Jake Gyllenhaal and Anne Hathaway.

The film’s marketing campaign looks like something, which is a mix of Jerry Maguire and Walk to Remember. But it is still going to be an age old drama with a beautiful couple who were last seen in the immensely loved picture Brokeback Mountain.

It is a dramatic tale following a lothario salesman competing in the cutthroat world of Viagra sales who enters a relationship with a woman suffering from Parkinson’s disease. I know it is a slight give away, but it will make all the women flock to the theater with tissue boxes.

The film co stars Gabriel Macht, Judy Green, Oliver Platt, Josh Gad and Hank Azaria. It is based on a book by Jamie Reidy titled Hard Sell: The Evolution of a Viagra Salesman. There might be some early Oscar buzz surrouding the film for Anne Hathaway.