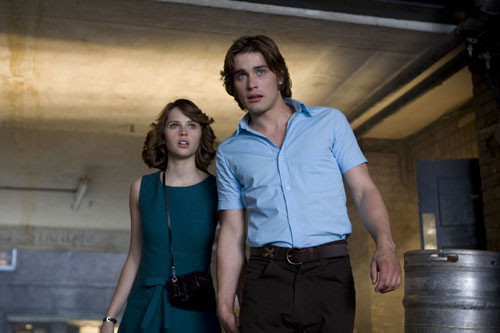 Here is a really sweet coming of age story Cemetery Junction that is being directed by the people behind The Office and Extras. The winning combination of Ricky Gervais and Stephen Merchant combine to find this weird sense of comedy in this film. The film is not even in the pseudo documentary style the two of them are known for.

There is something really happening in this trailer. But I m really not sure what it is. The one liners seem to be functional. Nothing is really revealed about the story and stuff. There are only two aspects in this film that really strike you. One is Christian Cookeâ€™s character wants to run away with his girlfriend and the second is about getting out of this town.

The film will be opening in the UK on april 7 th in the U.K.

Cemetery Junction tells the funny, touching and universal story of being trapped in a small town and dreaming of escape. In 1970s England, three blue collar friends spend their days joking, drinking, fighting and chasing girls.

Freddie wants to leave their working class world but cool, charismatic Bruce and lovable loser Snork are happy with life the way it is.

When Freddie gets a new job as a door to door salesman and bumps into his old high school sweetheart. The gang is forced to make choices that will change their lives for ever.