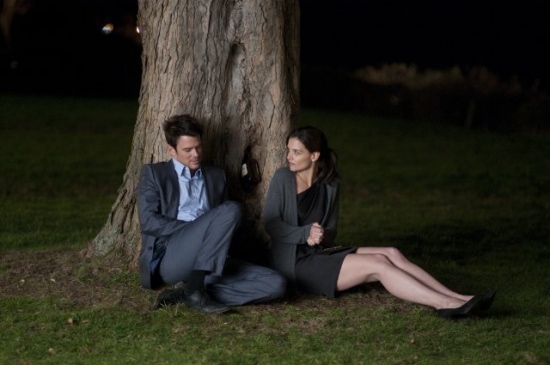 Paramount has just released the first trailer for The Romantics. It has a huge star cast that includes Katie Holmes, Josh Duhamel, Anna Paquin, Adam Brody, Malin Akerman, Elijah Wood, Candice Bergen, Jeremy Strong and Dianna Agron. The film was adapted by Galt Niederhoffer and also directed it based on her own nove. She received the sundance award in 2007 for producing Grace is Gone.

Here is a synopsis, which has driven all these stars to join in this film.

Over the course of one raucous night at a seaside wedding seven close friends, all members of a tight, eclectic college clique, reconvene to watch two of their own tie the knot. Laura (Katie Holmes) is maid of honor to Lila (Anna Paquin), her golden girl best friend. The two have long rivaled over the groom, Tom (Josh Duhamel). Friendships and alliances are tested and the love triangle comes to a head the night before the wedding, when the drunken friends frolic in the nearby surf and return to shore… without the groom. Based on the heralded novel by producer, novelist, director Galt Niederhoffer, THE ROMANTICS is a Zeitgeist love story and generational comedy that breathes new life into the genre and recaptures the camaraderie of youth.

The Romantics opens in New York and Los Angeles on September 10th 2010, and will expand throughout September.