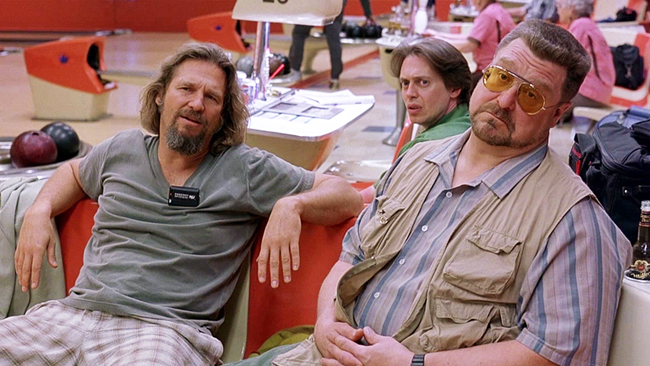 The Beauty of Abiding

Screenwriting 101 dictates that every main character must have a story arc. They must want in the beginning and must achieve at the end. It’s advice that every teacher in every writing class will give his students. And, like all good advice, the masters of the medium have completely debunked it.

Most movies obey this unofficial rule, and many benefit from it. But there are a few select films that have found an unwavering character to be the anchor for their story. It is reassuring to see a character so dead set in his ways that nothing can change his outlook on life.

Netflix recently added the cult classic The Big Lebowski to its impressive lineup. The Coen brothers wrote one of the smartest, most ingenious stories ever put to film and not one iota of The Dude changes throughout. He goes through experiences but his philosophy remains the same. Throughout the entire movie one single sentence remains true about this iconic character, ‘The Dude abides.’

The Dude has become an iconic character because of this inability to change. The characters charm comes from his slacker attitude, and unwillingness to change despite what the world wants. His Dudeness remains a rock in the insane stream of a story that cascades around him. The stories nonsensical nature would be driven even more insane if the main character went with it. But the insanity seems docile when seen through the unwavering eyes of The Dude. He reacts to the events of the story, but all the while he simply, abides.

Jeff Bridges in ‘The Big Lebowski’

His unwavering sense of self is a product of the films source material, The Big Sleep. An iconic detective novel written by Raymond Chandler. In both film and book, the main character sets out to solve a mystery while dealing with a long list of interesting characters. The film simply changes out all the hard talking gangsters with over the top buffoons. But neither one has a main character who changes his outlook on life.

In mystery novels it is more common to leave out the character arc for the detective. The reason being, that the detective is the source of all that is right. He is the person who has all the knowledge and experience, it would seem unnatural for him to change his core character, because his character is the one figuring out the rest of the story. It also allows for a sense of continuity if the character were to appear in future novels. Phillip Marlowe, Sherlock Holmes, and even Batman are all immune to change. And all of these detectives are relatively the same throughout their many appearances.

The myth of the character arc is one that has burdened many interesting characters. Many screenwriters will force their main character to have an epiphany, or life changing moment, when they were in the right all along. All for the sake of closure at the end of the film. But as the Dude shows sometimes it’s nice to watch a person who simply abides.