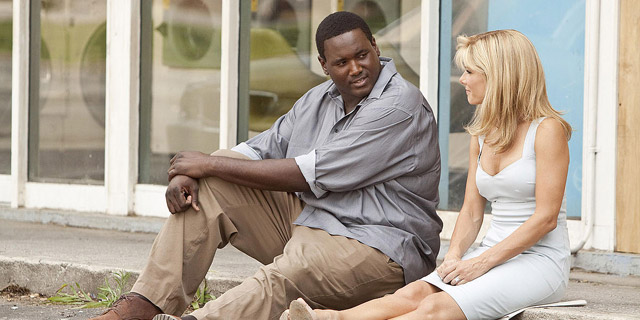 Review: ‘The Blind Side’ will inspire everyone Every year lots of sports based movies come out, but how many have been really able to have a moving effect on you. Incase you haven’t watched Blind Side yet, you should. This is not a movie entirely based on football, but is more about making the right decision to do the right thing and sticking with it.

This is the real-life story of Leigh Anne Tuohy (Sandra Bullock), her husband Sean Tuohy (Tim McGraw) and their new found son in Michael Oher (Quinton Aaron). Leigh Anne is the type of person you do not want to deal with as she talks mostly to a person’s face and gets what she wants. One night when she spots Michael walking in the cold rain without a coat, she approaches him and changes his life forever.

Michael’s father left when he was just a baby and his mother is a drug addict. Even though he is homeless and wanders from couch to couch, his spirit is never broken. He has the body of a giant and the heart of a lamb. The love that Leigh Anne and her family show Michael is true to heart and is unbelievable. They treat Michael as their own son and provides him with all the comforts of life. What you never see are the real children ever arguing or being selfish towards Michael and that goes to show how humble the kids were and how good parents Leigh Anne and Sean were. They then make sure he goes to college, hires a tutor to help him out, which in turn leads to college football coaches all over US trying their best to get Michael due to the huge talent he possesses in the game.

There is a lot to like in “The Blind Side”, with strong support by the secondary characters, and the way the story is kept from becoming over-sentimental. It moves well, and it does give you a refreshing twist on something we have seen before. Here it all depends on how it is executed and much of the strength lies in Bullock’s performance which I must add is one of her best till date.