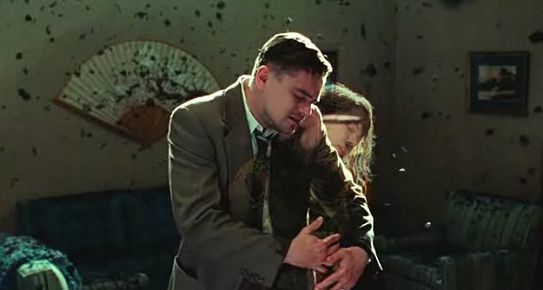 Martin Scorsese after winning his first oscar two years back, is back with a movie quite different from what he normally does. If someone else had made this movie, maybe Michael Bay, he would have just blown up the island to bits in the first scene itself. This movie not only shows Martin Scorsese’s masterful touch but also how he flawlessly tells a story that is unreal from the very first minute. Fueled by some brilliant performances from his cast, stunning cinematography, and his own incomparable skills as a director, Scorsese has woven together a thriller as intricate as it is haunting.

It’s 1954, and U.S. marshal Teddy Daniels (Leonardo DiCaprio) is assigned to investigate the disappearance of a patient from Shutter Island Hospital for the criminally insane. He had been gunning for an assignment on the island for reasons of his own, but before long he wonders if everything is just a twisted game by the hospital doctors whose radical treatments range from unethical to illegal. The officials never allowed him to access patient nor staff records for unknown reasons, and thats when things start to get a bit murky. As a hurricane cuts off communication with the mainland, all kinds of improbable and confused clues keep surfacing and Teddy begins to doubt everything, his memory, his partner, even his own sanity. The first thing to strike me was the fantastic score Scorsese compiled. Classical music was used sparingly and effectively. Also, the use of silence in this film was remarkable. As Teddy is walking through the terrifying halls of the mental hospital, the silence scares the audience more so than the darkness and the cells patients are thrown into. The cinematography was also fantastic in this film. I loved the switch in color palette between life on Shutter Island and the images in Teddy’s mind. This plays a huge part in the story line, helping the audience decipher what is real and what is clearly a hallucination, but at certain times, one cannot distinguish the other. The visuals here are especially rich and vivid. Everything from shots of a lakeside house to a concentration camp is given a dreamlike treatment that provokes awe and horror in equal measure.

The acting was wonderful. DiCaprio is at his finest. He has given his best performance as he always does. You can’t help but empathize with his character, no matter what. Ben Kingsley is intellectually terrifying. The manner in which Sir Kingsley carries himself is so eerie that you are sure he is up to something. Mark Ruffalo is overshadowed in this film but does a nice job. Emily Mortimer is quite convincing as a mental patient and Michelle Williams’ depth was a pleasant surprise. I didn’t think she’d play quite as large a role as she did.

The twist ending, which is predictable in hindsight but handled with such maturity that it seems less of a twist than an inevitable conclusion. DiCaprio’s best work comes in these last few moments. Shutter Island raises questions as troubling as the last dialogue in the film. “Which do you think would be worse,” Teddy says to Chuck (Mark Ruffalo) near the end of the film, “to live as a monster or to die as a good man?”