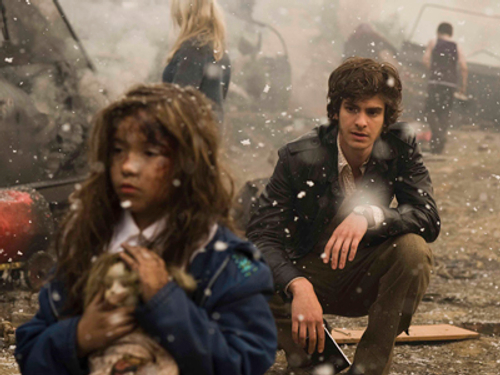 Red Riding Series: The Year of our Lord 1974 How far can we go to rat out the scum of our society?

What if the scum is within all of us?

It is a challenging paradox that this film deals with. But unlike its literary counterpart there is lot less use of convoluted perspectives to make it more accessible. Walking through the streets of Yorkshire we feel a dÃ©jÃ  vu. We have been here before. The sweat of the characters seems familiar. We are pulled into the saws of death and putrefying detail. Are we just witnessing the destruction of the human spirit?

We first see Eddie Dunford as a man who is part of this system. But it is his youthfulness that makes it difficult for him to adjust. His insipid surroundings make him feel uneasy. He is put on the task of finding the murderer of the young girls. But there is lot being said about these murders but a sheer lack of interest on the investigation. Everyone seems to be divided on who would have done these murders. But over here it is not the murders that take center stage. There is several other angst driven human concerns that provide the epicenter of the plot.

Youth has its way of playing with ones memories. It lets make our own truths and leave with a high sense of moral. But through time it leaves at the perils of reality. The director of this film uses this to great effect. Creating imaginary rooms with swans hanging from the ceilings, these are images that will be with you even after the movie is over. It is only the vigor of the writing that brings the profundity of each of the subsequent films. There are lots of gaps left intentionally for us to get a feeling of impending catastrophes.

To say that the director Julian Jarrold was left with the weakest of the three films is just ignorance. His film makes the right impact for the subsequent stylized features. But a simple phone call could make all the difference and even the connection between the subsequent films. That is really the greatness of where this story has gone. David Peace has successfully created a reality that breaks so many barriers and even lets the flood gates open.

There are many references to movies like Taxi Driver and Lost Highway. But these tributes donâ€™t take us away from what is inevitable.