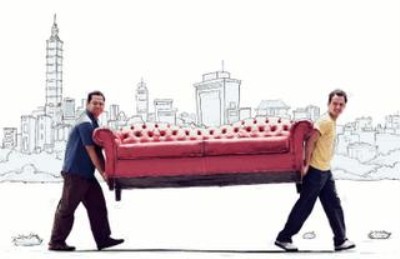 Pinoy Sunday has something for everyone ”PINOY SUNDAY”……….. is an uproarious yet tender indie comedy by a Chinese-Malaysian director about the trials and tribulations of a pair of happy-go-lucky Filipino foreign laborers working in a factory in a newly wealthy Taiwan.

These two dudes represent the Third World workers who make the iPads, iPods and iPhones in spotless factories in Taiwan that fuel the consumer-hungry Western world.

And yet this movie, a truly wonderful film, will likely NOT be shown in the West or anywhere outside a few art theaters and film festivals UNLESS the Internet and blogosphere propel this movie to the place where it belongs: winner of the Oscar award for Best Foreign Film. Think CINEMA PARADISO, think LIFE IS BEAUTIFUL. It’s that good!

I am a fan. See the trailer here [LINK]and you will understand why. This is not a film for just a few people to see. This film belongs in every movie theater on the planet. Danny Boyle and Shekhar Kapur need to see it. And you. Yes, YOU dear reader. Go see this film.

The film is both comedy and tragedy, with a storytelling touch that is as sublime as much as it is divine.

And the star of the movie, the inanimate yet colorful star of this wonderful cinemagical masterpiece — as part of the entire 90 minute romp in la condition humaine — is a red sofa. Yes, you read that correctly. A bright red leather sofa that’s been thrown away by a wealthy Taiwanese family — discarded and left on a
dirty city sidewalk in metropolitan Taipei — is one of the stars of this movie. It’s a symbol of many things in the film: the haves and the have-nots, the rich and the poor, the factory bosses and the factory workers, the Taiwanese rich and the dark-skinned foreign worker migrants from the Philippines, dreams and reality, justice and injustice, love and betrayal — all wrapped up in one bright red sofa!

It’s red. It’s a couch. It’s been thrown away as garbage. To the two Filipino factory workers from overseas, working in Taiwan to make money for their families back home in Manila, the red sofa is a dreamed-of ticket to comfort.

So they spend the entire film trying to get the oversized, cranky, creaky, ungainly, and yes, heavy red sofa back to their worker’s dormitory on the outskirts of town. In factoryville Red, red, red. The sofa is red. You gotta see this movie. You will never quite look at a sofa the same way again, especially a red sofa like this one!

The various attempts to push, pull, carry and even float the sofa to their spartan dormitory room is at the heart of this laugh-out-loud tragi-comedy that would make even Shakespeare proud, yes, the comedic
Shakespeare, and not only Shakespeare….