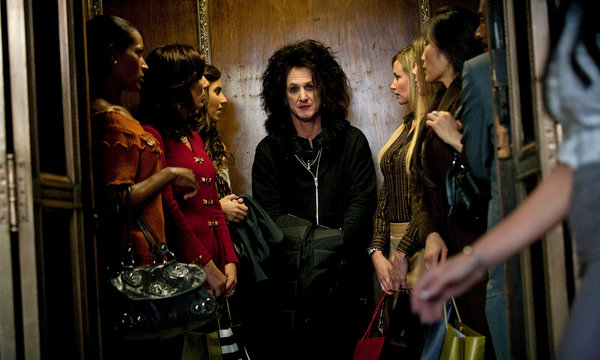 Paolo Sorrentino’s This Must Be the Place: Finding Grace on the Road

Most American foreign film audiences were introduced to Paolo Sorrentino in 2014 with the magisterial The Great Beauty (La grande bellezza). They will at some point (the lag between foreign film releases and their openings in the U.S. hinterlands being pitiable) have the pleasure of seeing Youth with Michael Caine and Harvey Keitel sometime in 2016. (One of my favorite performances of all time is Harvey Keitel in Abel Ferrara’s Bad Lieutenant, and, of course, he’s everyone’s favorite as Mr. White in Reservoir Dogs, so I am looking forward to seeing him again in a major role.) Until Youth’s arrival, brush up on Sorrentino’s oeuvre with 2011’s This Must Be the Place, the first in what may ultimately coalesce into a trilogy – rounded out by The Great Beauty and Youth – about art, its commercial counterfeit, mortality, and the profundity of human relationships.

Domiciled in an Irish manor, washed up ‘80s goth rocker Cheyenne – soulfully inhabited by Sean Penn in a shock of dyed black hair, black nail polish and eyeliner, and red lipstick – is bowed by pervasive sorrow, regret, and the weight of an elderly age he has yet to reach. He trails a shopping cart behind him as he wanders through his days, looking like a broken bag lady as if crushed by youth early on in preparation for a world where ineffable violence lurks and nothing that resembles real nourishment is packaged in sprightly logoed boxes regimented on infinite grocery shelves. Our faded rock star may be financially set for life, but, unlike the art critic Jeb Gambardella of The Great Beauty who rubs shoulders with Rome’s glitterati, this forgotten celebrity haunts a Dublin shopping district. Sadly, what passes for culture these days in both cities – lowbrow or highbrow, Dublin or Rome – is empty of calories and replete with shallow amusements. Among writer/director Sorrentino’s concerns is the distinction between art and divertissements, a distinction as important to Jeb in The Great Beauty as it is to Cheyenne in This Must Be the Place. “[A] common problem among the youth,” Cheyenne opines: “Distraction.” As the clutch of depression tightens, Cheyenne mulls over the idea of going away for a while on his own, but he hasn’t driven a car in 20 years. “You’re the only bloke I know,” his friend Jeffery (Simon Delaney) cautions, “who throws up when he gets on a train.” “Exactly,” says Cheyenne. “There’re just too many things I don’t do anymore.”

As the man-child (for what is the ideal of a rock star but a perpetual adolescent?) – and a character possessed of a voice that seems never to have undergone a pubescent break – emerges, we come to ache for Cheyenne and his psychic isolation, cocooned in a persona like a security blanket of which he cannot let go. He has a fan club of one: Mary (Eve Hewson) can recite every detail of his career. His relationship with her rests not on a fulcrum of ego, but on a sense of responsibility as a tender protector worried for her aloneness amidst an indifferent world. Wondering aloud why, of all the vices he’s indulged, he never took up smoking, Mary’s mother (Olwen Fouèrè) declares, “You never took up smoking because you remained a child. Children are the only ones that never get the urge to smoke.” Cheyenne’s greatest quality would seem to be an innate sense of kindness shaped by a keen understanding of the universal experience of loss. And yet, the melancholic Cheyenne is buoyed by his wife, Jane (Frances Dormand), an equally kind – though well-adjusted – fire fighter by profession. Her genuine love for him is palpable. When Cheyenne learns his father, with whom he has not spoken in 30 years, is dying, she supports his resolve to embark on a journey of reconciliation. “Come back soon,” Jane entreats, before Cheyenne sets off. “You know I can’t live without you.” “That’s not true,” he says, “but it’s kind of you to say.” In Dublin, Cheyenne is occasionally recognized, more often as an object of ridicule than respect. There is an unopened letter from MTV, and there’s an eager would-be rocker who has sought Cheyenne out to produce his first album. “Who are you?” Jane asks. “The future,” Steven (Johnny Ward) replies. Cheyenne wants to know the name of Steven’s band. “The Pieces of Shit,” Steven tells him. (The songs they perform on the soundtrack were written and performed by the Talking Heads.) “That’s a really good choice,” Cheyenne says after some reflection. “You’re fucking right it is, yah! Took us six months to come up with it. Besides, it’s exactly the right name for this moment in history.” Like The Great Beauty, This Must Be the Place makes evident the vacuum that is the contemporary zeitgeist. It dares to question our relationship to history on the one hand and our obligations to the future on the other: where does our present moment stand in relation to the past and what responsibility do present generations have to those who came before and those who will come after?

Cheyenne’s fear of flying, fueled by his fear of death, lands him on an ocean liner headed to New York, the first station in a quest that will shed light on his father’s past and, in turn, illuminate his understanding of himself. He is too late for the reconciliation. Sitting beside his father’s corpse, he gazes first upon his visage – a stern face that rejected him at 15 years of age when Cheyenne first adopted his glam persona – and then upon the tattooed numbers on his father’s arm.

Going through his father’s papers, Cheyenne comes upon journals in which his father has written of his experience in Auschwitz and his attempts to find his tormentor, Aloise Lange, in every corner of the United States. Cheyenne seeks out Mordecai Midler, a legendary Nazi hunter who tells him that Lange “was a small fish. We were hunting sharks.” “Well, of course,” Cheyenne laconically remarks. “It makes a bigger impression.” “What are you insinuating?!” Midler indignantly bellows. “That even Nazi hunters follow the rules of show business and go where the biggest publicity will be.”

The journals are the initial catalyst for the crisis of inertia Cheyenne is seeking to break. He attends a Talking Heads club performance, the subsequent scene of which unfolds as an ambiguously real or dreamed conversation with David Byrne. Cheyenne begins by praising Byrne as a true artist to which Byrne responds that when Cheyenne was still performing, he was an artist, too. “The fuck I was! The fuck I was!!” Cheyenne cries out. “I was just a fucking pop star and I just wrote dreary pop songs because they were all the rage and made tons of money.” Early in the film, Cheyenne has gone with Mary to lay flowers on a double grave. There he encounters the deceased’s family who tell him he is not welcome. Now he speaks to Byrne as to a father confessor. “Depressed songs for depressed kids! Two of them more fragile than the rest who ended up doing themselves in as a result of it and now I go to a cemetery once a week to appease my guilt and it doesn’t make it any better! It makes it worse!! It makes it fucking worse and then my wife asks me why I don’t play anymore and I think she must be a fool because it’s that she just loves me very much which makes her more of a fool because she doesn’t know what a disaster her husband is and that’s it, David. That’s it.” The weight of self-reproach, the fear of being caught out as a fraud, the shame of unearned love. That’s it. “Before the inferno I had a light heart. As a child I liked to stare at the Polish sky, the same sky that later I saw from the camp, stained with black stripes, columns of smoke, all that was left of my relatives. Still, that terrible sky didn’t stop me from marveling at the beauty of the sky. That’s a monstrous thought, like all the thoughts that people caught in an inferno have.” This preface to the Holocaust survivor’s journals unfolds as we see Cheyenne piloting a quintessentially American black pickup down the road of America’s heartland. He has undergone the catharsis that will allow him to fulfill his quest, come to understand paternal love, exact a strangely just revenge, and take him home again to Jane, like Odysseus returned to Penelope.

Home, is where I want to be

But I guess I’m already there

I come home, she lifted up her wings

I guess that this must be the place

G. K. Chesterton once wrote “that thanks are the highest form of thought; and that gratitude is happiness doubled by wonder.” When a tattoo artist, one of Cheyenne’s encounters along the way, asks, “What do you do?” Cheyenne replies, “At this particular moment? I’m trying to fix up a sad boy and a sad girl, but it’s not easy. I suspect that sadness is not compatible with sadness.” “I fixed up my aunt…with a friend of mine,” the tattoo artist tells him. “It’s a beautiful thing. They keep each other company and they’re grateful to me. Another beautiful thing. Gratitude.” “Life,” says Cheyenne, “is full of beautiful things.”

Early in the film, when Mary and Cheyenne visit Mary’s mother, she seems disoriented when she asks about her son, Tony, a runaway. “Unfortunately, I don’t know where he is,” Cheyenne tells her. “Well find him then,” she insists and asks, “Why, if everything is just fine, why would someone just leave without saying a word, without sending news? Why?”

Just before the curtain’s fall, Cheyenne returns to Ireland – sans dyed hair, black wardrobe, eyeliner, and lipstick – and looks toward Mary’s mother’s window – a traveling quester returned to Ithaca. At the outset Cheyenne has asked Mary’s eager suitor, “Please, don’t give up on Mary. Promise me.” “Your father loved you,” the Nazi hunter Mordecai Midler tells Cheyenne before they part ways. “That’s not true,” Cheyenne tells him, “but it’s nice of you to say.”