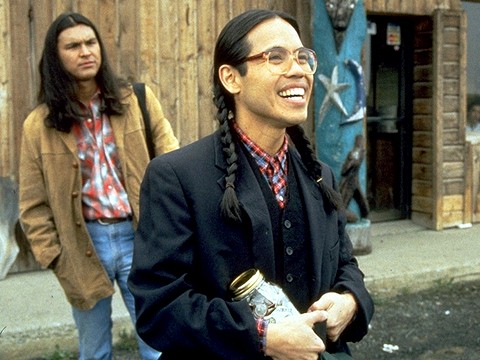 Native Film ‘Smoke Signals’ Is a Pleasure to Watch

Upon chance not too long ago, I happened to stumble onto a film that does what I love cinema to do- it made me pause, enjoy the film greatly, but ultimately consider the film in its intention and context.

This indie-gem is “Smoke Signals”, which was directed by Native American Chris Eyre. The film’s straightforward narrative follows two young men on a journey to the burnt deserts of Phoenix. Through their journey, they walk through the ghosts of their pasts, while encountering a number of lively individuals, ultimately finding a number of surprises out in that dusty desert.

It achieves a difficult tonal level, one of balancing on edgy themes of stereotype and race, identity and community, while at the same time coating the whole thing in a humorous, if not wry light, held together by balancing performances by Adam Beach and Evan Adams. Evan Adams plays a spectacled Native, with a glib smile and a sense for the tall-tale. On the other side, you have Beach’s stoic portrayal of a hardened boy attempting to seek out just who exactly his father was. This is, as I can recall, the only film rendering Native Americans without flashing even once to the historic past. In fact, the furthest of the flashbacks is in the 70’s. The images of the hostel savage, crouched and brandishing a spear are dissipated entirely. Fairly, it could be said that this film has counter acted many of those images, since its creation in 1998. Helmed by an actual Native American, the perspective is made clear through each of the film’s brassy characters, even if the characters are white. It take you back to the more simplistic eras, and gives you a dose of Indian viewpoint.

Yes there is alcoholism. Yes there is long braided hair. But, these things are not given at face-value. They are examined vehemently, so much so that the film and its characters take ownership of these labels. The stamp of the drunken Indian has been reclaimed, and been doused in the best possible weapon possessed- satiric humor. What better way to disband something than to laugh at it? This picture is not excessive about it however, and still manages to stab the desired emotional jabs.”Smoke Signals” even has a little pulp within it- its colorful characters providing possible room for cult-classic sorting. These sort of things make even more memorable.

I invite you to have a view of this film, and I am quite sure that what you take away will vary depending on the viewer. The most simple of movies are powerful in the way they draw you in, and help you take a scrupulous look at what we may not have looked at, or even cared to look at before.