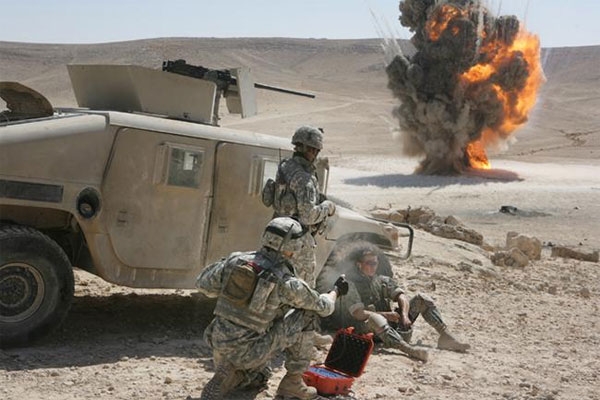 With several films on the subject on the war on Iraq failing to hit the marquee, so this one surely comes with its surprises. We are not going to reveal the details of a film shot with beautifully staged moments of reality. Hurt Locker is tightly wound up in its assertions and what it wants to show the audience.

Unlike other War film it jumps into the action without much of character representations. There is no time for an establishing shot. It goes along like a pseudo documentary fashion. But it doesnâ€™t plays to the clichÃ©s of the genre. It feels like an angry child frustrated with what the genre has to offer and comes undone. It is a high price the director has to play by giving some of the stars supporting roles. But it comes with its rewards.

The fact that the last film I reviewed also challenged the question of fear. Fear is something that drives these soldiers into battle. It is the only thing that keeps them from loosing their minds. There is also whole lot of adrenalin kicked around to make it feel at home with the war. We are not sympathetic to any one character and time is pulled away from under us. It is not something to relish but like the director says war is addictive. It is singular in its approach to the quote embellished in the beginning. The camerawork keeps many of the situations in such tension that we are not sure what to expect. We are left with lot to ponder on first viewing this film. It will soon simmer in a second which is highly recommended.

For me it was the moments in the back alleys that rang true to what the soldiers are facing. The soldiers are left stranded in a country that doesnâ€™t make sense to them. They are stranded mentally and physically over here. Their minds are left to wonder in the vast expanses this country has to offer. Nothing seems to stick with them. This is certainly not a vacation but it is work and they are forced to live with it. But after a while questions begins to rise on whom and what are they fighting for. When will this nightmare end or will it ever? When posed with these questions the directorâ€™s answers with gracious skill. You are left alone in the darkness of your seat with the answers blowing at your face.

To say that I enjoyed this film would have been an understatement. It is more like a jolt to the arm, for a world plagued with so much treachery. You really are not meant to forget what it means to be with your loved ones safely tucked home. I am not trying to sound patriotic, but I am certainly angry with what war entails for these men. Men built by the lunacy of their establishments.