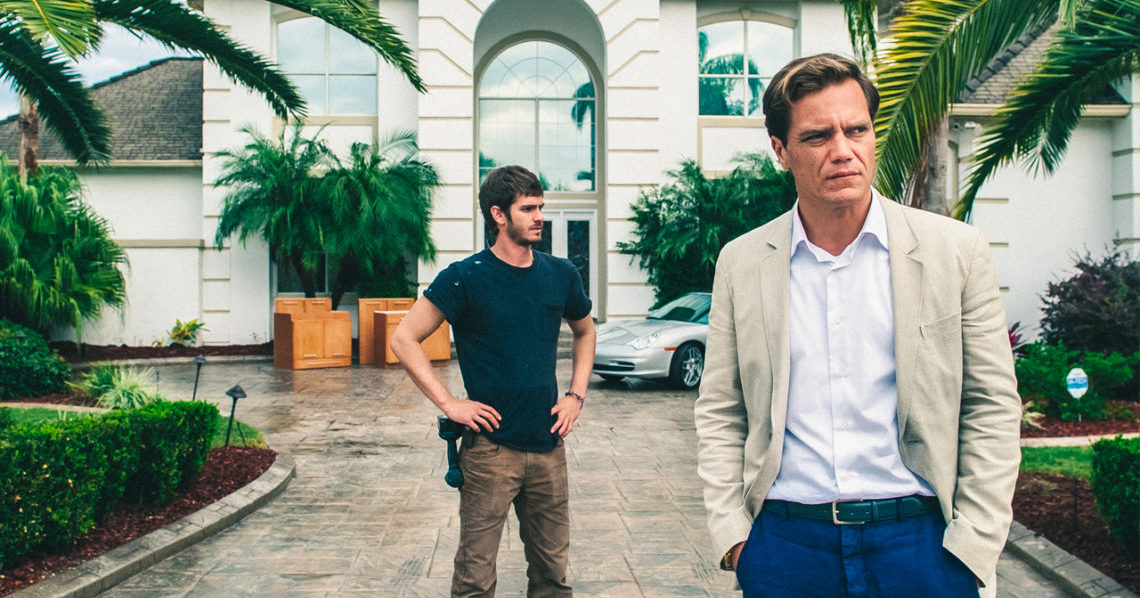 What if someone came to your house and asked you to leave it for good since you did not pay your mortgage or for any other reason, would you leave your family home? Did you even imagine that this kind of situation would ever happen?

This movie will resonate extremely with those people who have been in the exact same situation that Andrew Garfield‘s character goes thru when he loses his family home and everything that he has worked hard for in a matter of 2 minutes. That is the amount of time given by the Realtor Rick Carver played by the enigmatic Michael Shannon. The movie shows how the housing eviction system is not only brutal but has no time to care for anyone’s situation and sheds no tears in the process.

Dennis (Andrew Garfield) is a single father who lives in his family home with his mother (Laura Dern) and his son Connor (Noah Lomax). He is taken to court for having missed couple of months payments after being just let go from his current job due to lack of construction work. The next day Rick Carver (Michael Shannon) comes by with his team to evict Dennis and his family. He is forced to take his mom and son and living a housing complex which apparently is also housing other evicted families. The next day he realizes that one of the guys moving his stuff stole some of his tools and to retrieve it back goes to the realty company creating a scene there. A job opportunity presents itself and he sees himself working for Rick Carver foe couple hundred bucks.

The only thing in Dennis’ mind at this point is to get back his home and he goes to great lengths to do so. Carver mentors him and Dennis starts going up the ladder not only by doing labor work but also doing illegal stuff like stealing appliances from homes purchased by other people and selling it back to them later. His mom thinks that he is still working construction but is very skeptical since he goes from making hundreds of dollars to thousands in a matter of days. Garfield is a talented actor and this role enables him to show it off. His best performance in my opinion will always be in Never Let me Go but he does a good job here. He is trying to do the right thing for his family and he questions himself at every point in the film but his helpless situation pushes him to do it even though he knows what he is doing is wrong. A lot of people would probably have done the same things he did in the film if they were in the same situation. Michael Shannon portrays Rick Carver in a scene from “99 Homes.”

When Michael Shannon comes on screen, it is mesmerizing. This on screen presence whether he be playing a good or bad character is one to behold. Most of his movies are performance heavy, in this movie he has a fun time playing Rick Carver. Shannon is frightening here, charismatic and suave in some instances, but entirely brutal and unforgiving in others. His role can be summed up in the dialogue he has with Dennis where he tells him to look at Houses as boxes and when a box is gone, you buy a new box. That sums up his character as being completely unemotional and unattached to anything. Every opportunity he sees is a money making opportunity, he does not really see anything else.

The movie on the whole is sad at times. You begin wonder what it is like to be thrown out on the streets after living many years in your home. It is a terrifying experience for anyone to go thru it and the movie captures his helplessness without holding back any of it. The very first scene in the movie shows a man who committed suicide with the thought of giving up his home and leaving it and Rick Carver walks in trying to figure out how he can clean up the mess and put the house up for sale as quickly as possible. The American Dream has come with the ideas that a job, a home, and a well-maintained family are indications of success, beyond any kind of human deed or morality, and with that comes unfathomable feelings of uselessness when either of those are taken from a person.

99 Homes is a powerhouse film that sheds light on the eviction process people have to go thru and in almost every case they do lose everything. The common thing every homeowner said in the film is that this is their house, they own it, why should they get evicted from it. People do not realize that the house was never owned by them even if their name was on it unless their mortgage was completely paid off. I think it is something not many realize unless a situation like eviction arises and they are forced to question their own way of living.