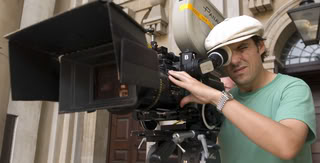 Director Joe Wright has developed some serious films like Pride and Prejudice, Atonement and the misfire The Soloist. Now his next film will be about a fourteen year old girl killing loads of people. Hanna, an action-adventure film described as a mix of La Femme Nikita and the Bourne films.

Wright who was meant to take on the Indian Summer, starring Cate Blanchett. But because of the authorities in that country and some budget concerns they had shut it down. So Joe Wright has totally taken his career in a different direction by taking on fourteen year old mass murderer.

The story centers on a 14-year-old Eastern European girl who has been raised by her father to be a cold-blooded killing machine. She connects with a French family, forms a friendship with their daughter and goes through the pangs of adolescence. When the girl is dragged back to her fatherâ€™s world and discovers that she was bred as a killing machine in a CIA prison camp, she must fight her way to a free life.

This is going to be something really huge if it is done well. But I really cant understand why Joe Wright has taken this up is he angry?